Dinner parties with friends are always fun but since going vegan I feel that I have to take some precautionary steps to prepare for a fun and worry free night. I try very hard not to impose my beliefs or choices onto other people, so when I am a guest I have to just prepare. There is nothing worse for me than a host feeling bad for not having enough for me to eat so I always like to bring a dish to share. I like to make something that is healthy with ingredients that everyone likes, something that compliments the menu as a side but that I can eat as my meal. I also tend to eat heavy all day so that I am ok with just a light meal for dinner.

They say that with true friends it doesn’t mater how much time passes without speaking as when you are together again its like no time has passed at all- and that’s what happened on Saturday. An old friend, who we went almost 5 years without seeing, until very recently, invited us to a dinner party in his new place. In the invite he asked to be made aware of any dietary restrictions so I RSVP’ed and informed him I was vegan BUT that I would bring a dish to share that complimented his menu and not to worry about me. A moment later I received a text insisting that if I brought my own food I would be insulting him and to please explain to him what vegan is and point him in the right direction for what to make. After some debate I obliged and promised not to bring anything and directed him to the recipes page on VeganAbbey for some of my favorite dishes.

Saturday night came and as promised we walked in empty handed except for a house warming gift which was not edible. There was a cheese and meat plate on the counter and on the table were some veggies and guacamole, a vegans delight. There was also some fig spread and crackers so I started to dig in. After a few cocktails and talking with some new friends a platter of buffalo cauliflower was put on the table with a side of ranch dipping sauce……and a vegan ranch for me! The cauliflower was amazing and everyone, meat eaters included, loved them! Nothing makes me happier than playing a role in sharing delicious plant based meals with non-expecting non-vegans. There were a ton of great conversations around my diet that were respectful and of genuine interest. I was extremely honored and touched that my friend and his girlfriend went through the trouble they did to ensure I was taken care of.

A little later in the night it was time for the main course. There was a tray of chicken for everyone and a giant bowl of the Artichoke and Spinach Farro salad that I LOVE! Everyone tried the salad and everyone loved it, they did an amazing job. Desert was a homemade cheesecake, some italian pastries, and a big bowl of fresh strawberries which I dug right into! 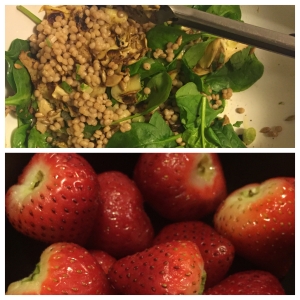 I left this dinner party with a full belly, full heart, and some new friends. He not only respected and took care of a friend that night- he also opened up minds of 8 other people which is the best gift of all for me.

Vegan Abbey and my journey is about helping people see easy ways to lead a healthier, cruelty free life whether it is for 1 day a week, several, or just when they wash their hands. I am grateful my friend had so much love for me and ultimately spread the love for animals.

Thank you AP! You are a true friend that I am lucky to have!